The Well Progressing on Enormous Site at Spadina and Front

Toronto’s largest construction site is making noticeable progress on the corner of Front and Spadina, where nearly a full city block extending to the north and west is being redeveloped with a mixed-use, multi-tower megaproject known as The Well. The community will eventually be home to a 36-storey office tower along with residential rental and condominium buildings rising 14, 16, 16, 22, 39, and 46 storeys, with a team of developers and architects involved in the community’s various components.

Set to be the tallest building in the complex, the 36-storey, Hariri Pontarini Architects-designed office tower for developers Allied REIT and RioCan REIT is currently the furthest along in its construction at the east end of the site. Being constructed by contractor EllisDon, the tower has progressed a fair bit since we last updated its construction in January. At the start of the year, the tower stood 13 storeys tall, while the first panels of a green-tinted curtainwall system had been applied to much of the podium’s third floor. Seven months of construction later, forming has reached the 23rd floor, while cladding installation has progressed beyond the podium to the tower above. 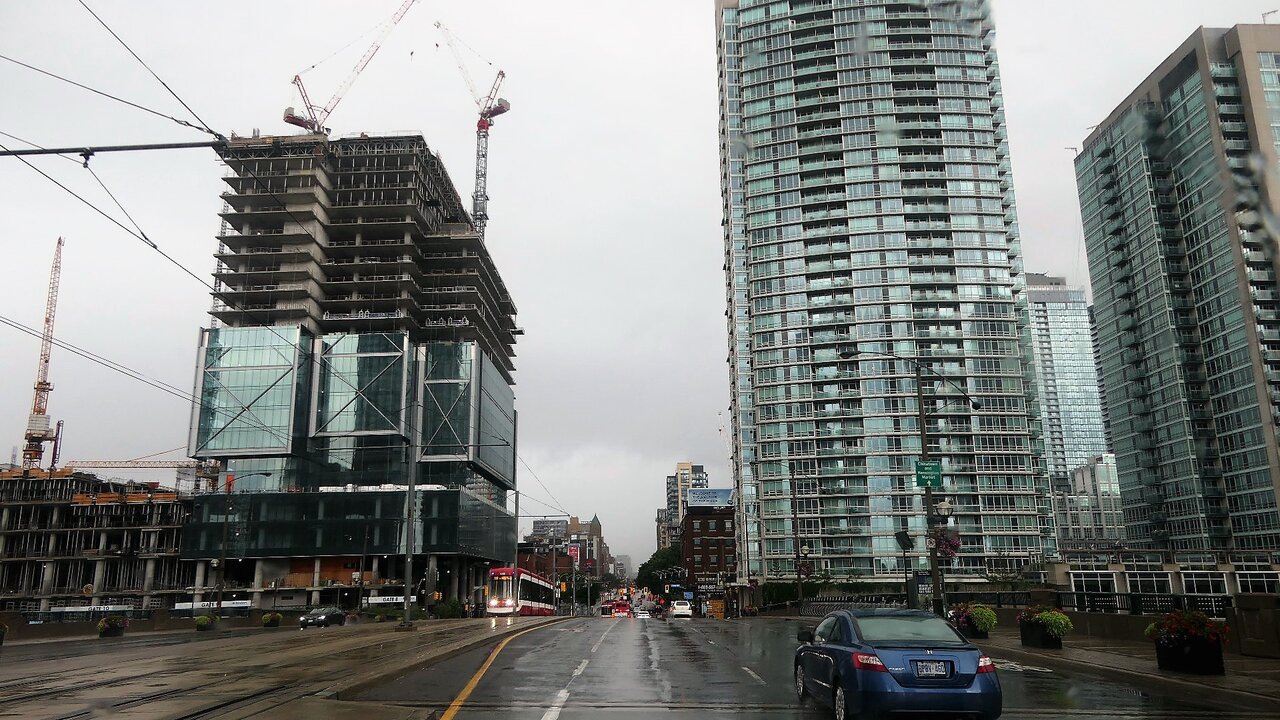 Looking north on Spadina to The Well, image by Forum contributor Jasonzed

Curtainwall glazing now stretches as high as the 11th floor of the office tower, while signature details have since joined the curtainwall to further define the exterior. Along the north and south elevations, the tower’s main exterior expression comes in the form of a series of decorative, non-structural X-shaped cross braces. The latest photos show that the lowest row of these ornaments are in place as installation begins for the second row. Strips of metallic finishes frame these features against the exterior glazing.

Along the north facade, the frames include a section being built over a glass-enclosed elevator shaft, extending the exterior expression while providing elevator riders with a view to the city. The north elevation also includes a stairwell with a rounded protrusion extending from the building, now being finished in glazing and shiny aluminum panels. 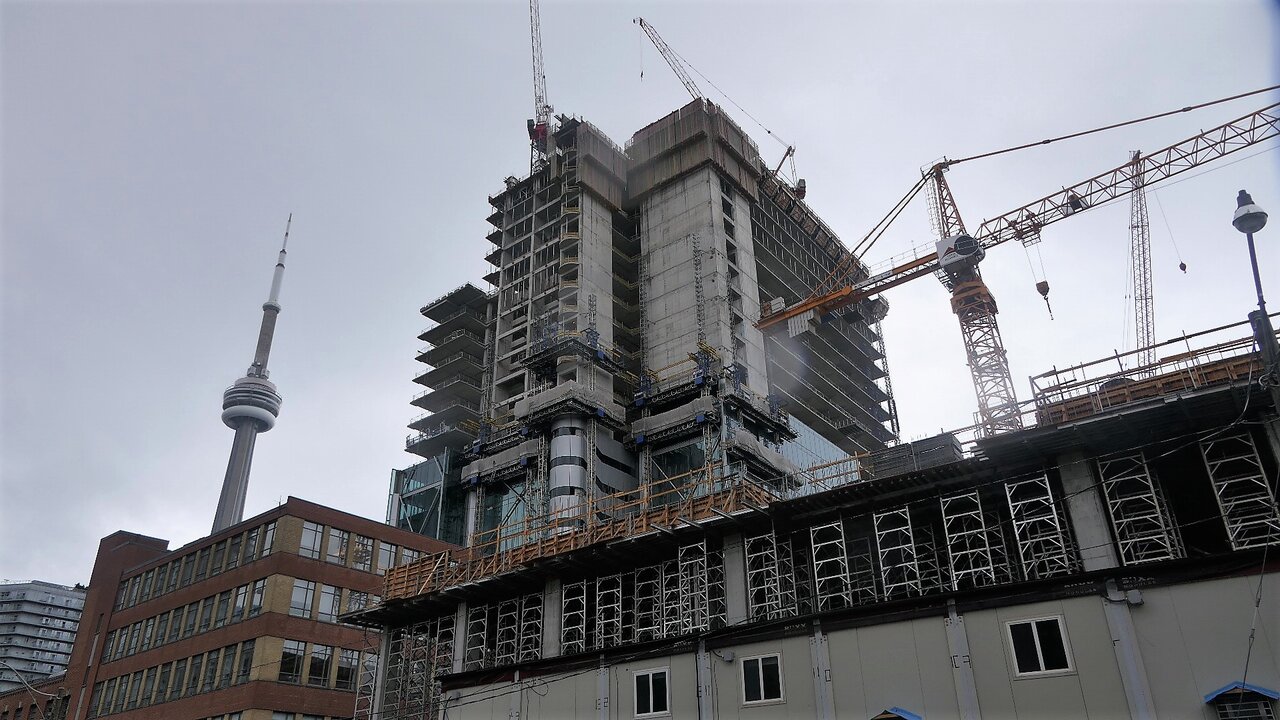 Looking southeast to office tower at The Well, image by Forum contributor Jasonzed 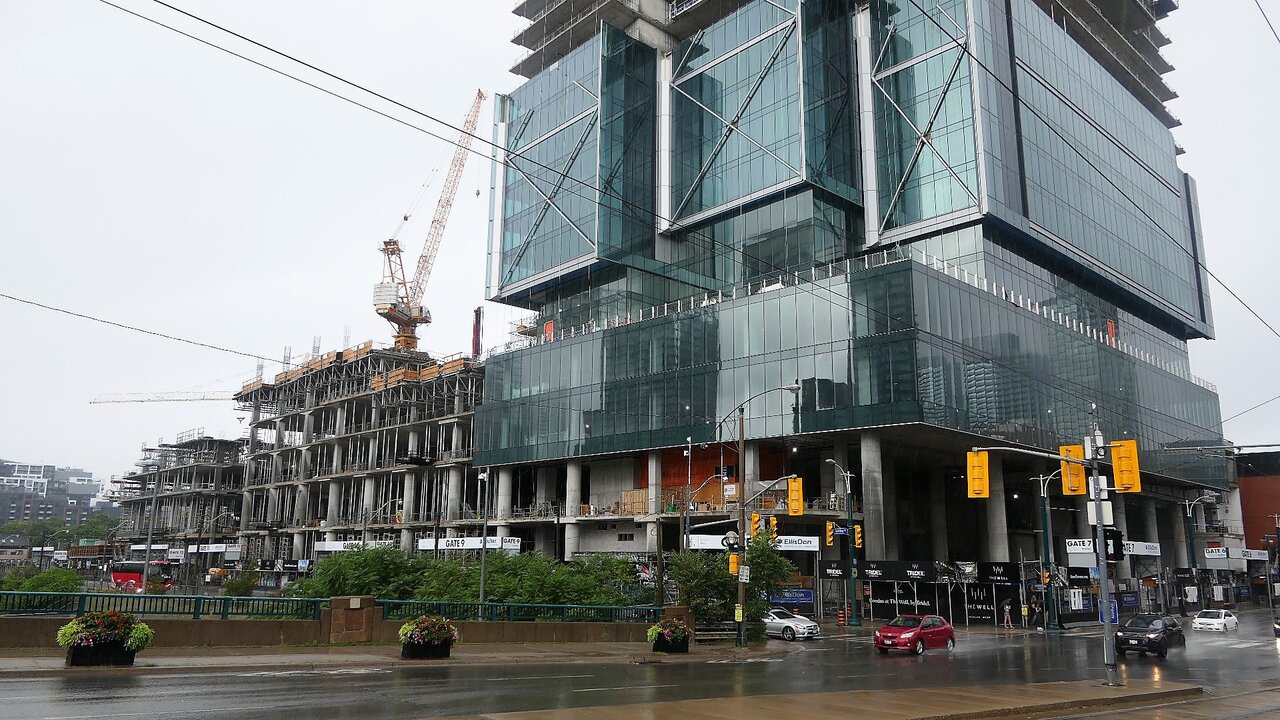 Looking northwest to The Well, image by Forum contributor Jasonzed

At the site’s southwest corner, a 22-storey Tridel condo tower is now having its ground floor formed, with the podium to follow over the next few months. 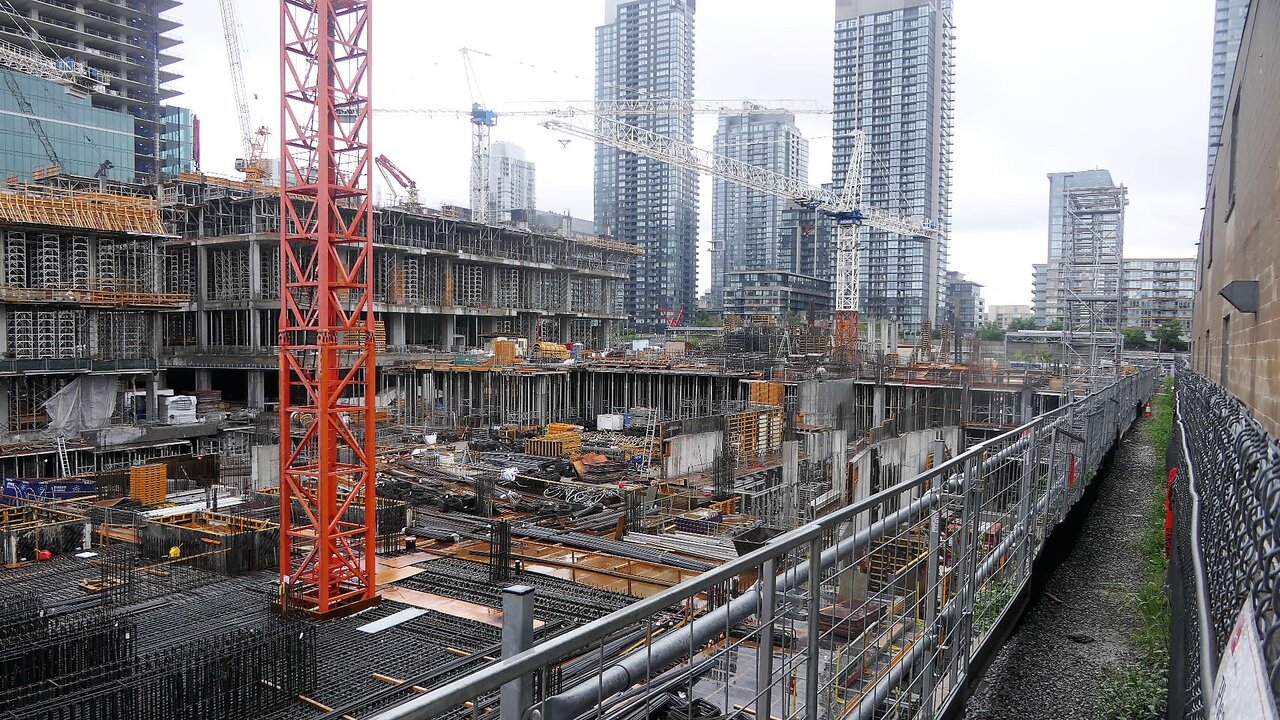 To the north, another trio of shorter buildings—a 14-storey Tridel condo tower and a pair of RioCan Living 16-storey rentals, all three designed by Wallman Architects—is to rise along Wellington Street. The eastern two buildings in this trio are now rising above street level, while the third building to the west is having its final underground level formed. 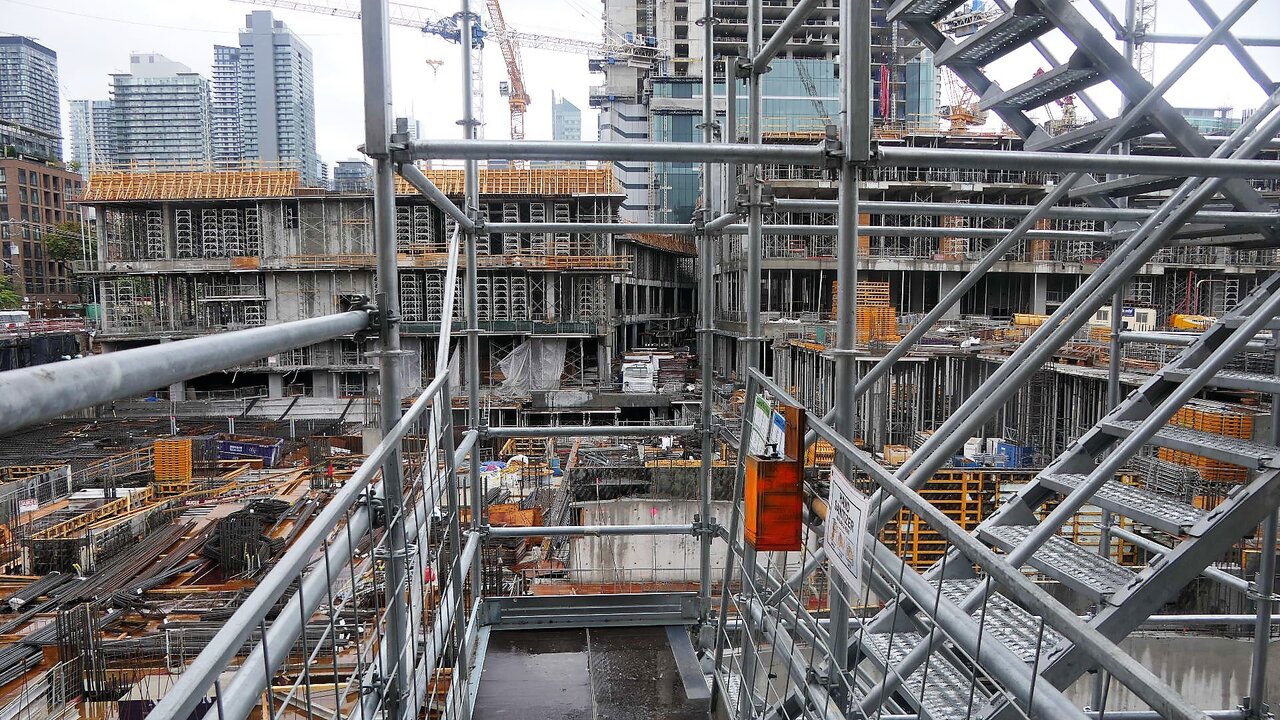 Facing east across site of The Well, image by Forum contributor Jasonzed

The above-grade rise of the complex’s buildings now reveals the curving path of a BDP-designed multi-level retail galleria running through it. 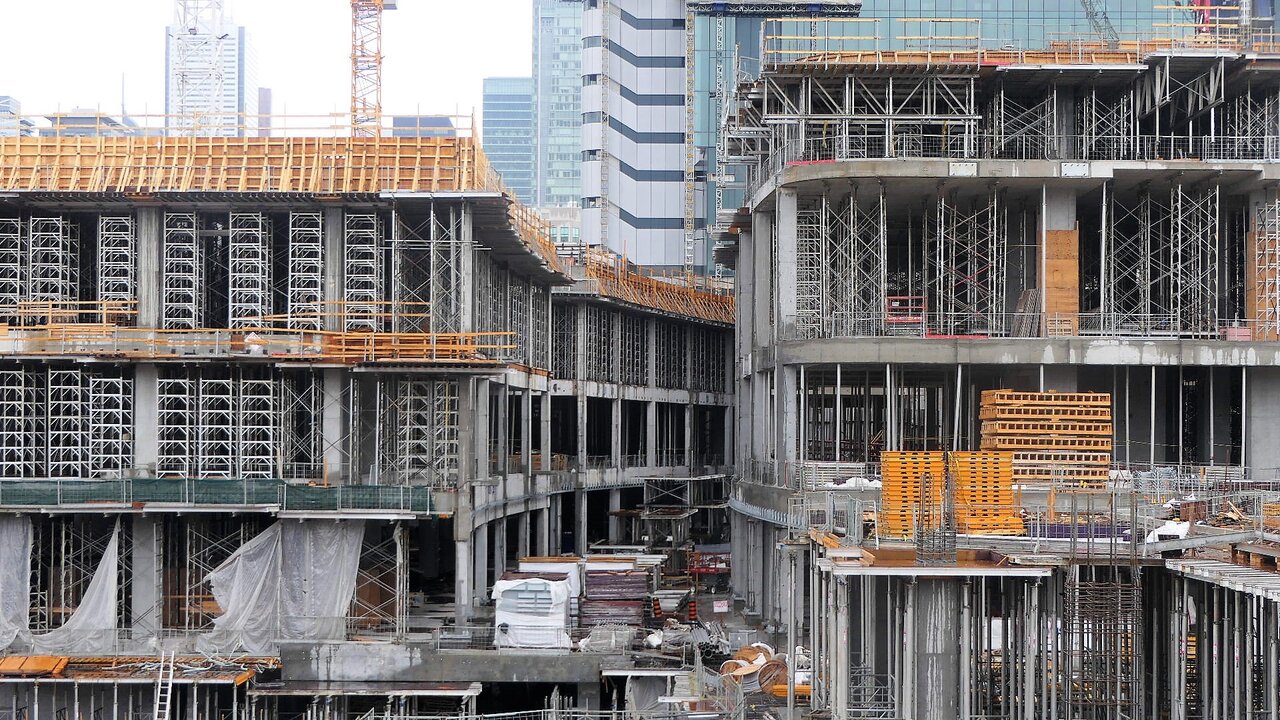 Retail galleria at The Well, image by Forum contributor Jasonzed

Additional information and images can be found in our Database file for the project, linked below. Want to get involved in the discussion? Check out the associated Forum thread, or leave a comment in the space provided on this page.